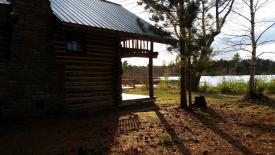 Lightfoot Bay is a beautiful coastal wetland located on Huron Bay in northern Baraga County. The property provides exceptional opportunities to explore the natural coast and diverse wetland and dune habitats. Visitors are welcome to hike, snowshoe, ski the trails, swim at the sandy beaches, and fish off the dock or along the sandy shoreline. Overnight lodging is available by reservation in two historic log cabins or in your tent. Night visitors are treated with excellent stargazing, aura viewing, and lightning bug displays. Hunting is allowed except near the cabins.

Cabin and tent reservations are required for overnight use, but the trails are open to the public year-round. Day visitors should respect the privacy of cabin users if present. Parking is available at the trailhead near the cabins or at pull-offs along the Pinery Cemetery Road. There are two outhouses onsite available for visitors.

Why this place is special

The multi-partner Lightfoot Bay Nature Area project was developed to protect unique Great Lakes coastal wetland and shoreline habitats that contribute to the overall health of Huron Bay and its diverse fishery. The nature area permanently protects much of this rare and unique coastal wetland complex, including over 6,500' of shoreline within Lightfoot Bay and 2,500' of Lake Superior barrier beach shoreline on Huron Bay. Over 70% of the project area is in nationally declining wetland habitat types, making it an important area for long-term conservation.

In addition to the high-quality fishery values, Lightfoot Bay also contains a number of other important habitats for biodiversity. Extensive cranberry bogs, fens, beaver ponds, and alder thickets make up a large part of the nature area, attracting migratory birds and waterfowl from across the region with bald eagles a common site. With little to no development in the surrounding area, Lightfoot Bay's night skies are among the darkest in the region and make it a perfect location for stargazing and aurora viewing.

The nature area was created in 2007, and further expanded in 2010 and 2016 for a current total of 131 acres under protection. Funding for this project was obtained from multiple sources, including the U.S. Fish & Wildlife Service's National Coastal Wetlands Conservation program and several partners who helped provide local match, including the original family that sold the core property to KLT at a bargain sale.

The two cabins at Lightfoot Bay were used for generations by the family that once owned this land and are now available for reservation by free-will donation. The main cabin is available in three seasons and the smaller cabin is insulated and available throughout the year.

Directions: Lightfoot Bay is remote, and access can be seasonally difficult. When approaching from L’Anse, head North on North Main Street, which turns into Skanee Road for 14.8miles. Turn left onto Town Road, following signs for Witz’s Marina for 1 mile. Turn left onto Witz’s Road immediately after the sharp right-hand turn. Continue straight past Witz’s Marina and onto the dirt road (Pinery Cemetery Road). Look for the KLT sign 0.5 miles past the marina. You have gone too far if you have reached the cemetery.

Please contact us to learn how you can stay the night in one of Baraga County's most scenic areas and help support ongoing stewardship and other conservation efforts in this ecologically rich area.